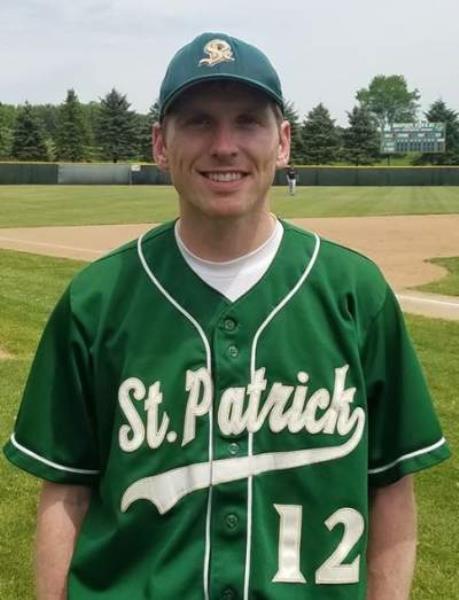 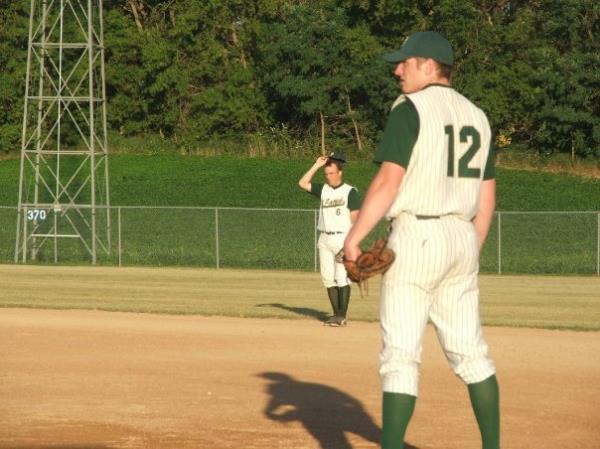 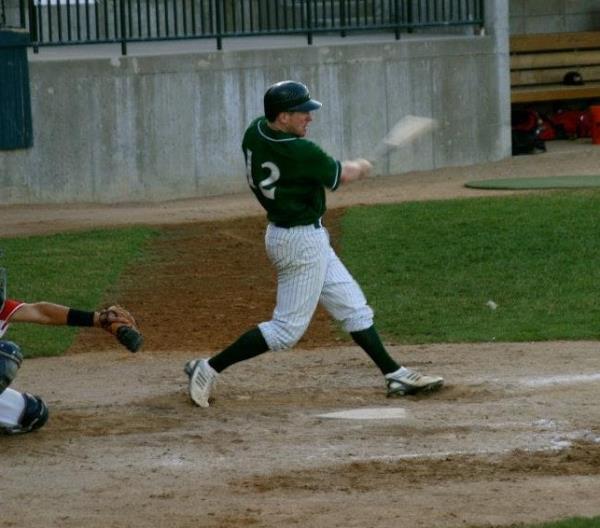 St. Patrick Irish fans have enjoyed watching great baseball and great players over the last few decades. As the calendar turns to a new decade, one of those great players will no longer be on the field for the Irish. After a 17-season playing career, Mathew Pexa has retired from amateur baseball. Best known for his impeccable defensive skills as a catcher, he was also an extremely dangerous hitter with a fierce competitive edge. He was part of a very talented core of players who brought great success to St. Patrick.

Mathew ends his Irish career having been the longest tenured player on the current roster. Signed before the 2002 season, he played in what he considers 17 seasons, after taking roughly half of the season off in 2013, and another one and a half years off from 2016 – 2017 while he lived in Ireland.

After moving to nearby New Prague when he was 10 years old, Mathew eventually joined many of his friends to play youth baseball in St. Patrick. As he got older, Irish team members Paul Meyer and Terry Odenthal, as well as the manager at the time, the late Monte Hennen, talked to him about joining the club. He took them up on the offer, and in the process was part of some of the greatest Irish teams, including 11 State Tournament appearances in his career (’02, ’04, ’05, ’06, ’08, ’11, ’12, ’14, ’15, ’18, and ’19). Primarily a catcher in his younger years, Mathew graduated from New Prague High School in 2004 and went on to play baseball at the University of St. Thomas. He was on the Varsity team from 2006-2008, graduating just one year before their National Championship in 2009.

Mathew’s strong defensive skills as catcher quickly became his calling card. “I remember Mathew coming into the [DRS] League in 2002. Fiery young athlete. He was always right in the battle and a leader of the younger group,” former teammate and former Manager John Johnson recalled. “He was the best catcher the League has seen. When he was behind the dish, nobody dared to stray too far from base, whether it be first, second, or third base.”

By the mid-2000’s, Pexa and Irish pitcher Bill Dunker had cemented themselves as a dangerous pitching and catching duo. “Mathew was a fierce competitor, great teammate, and smartest and best all-around player I’ve ever had the honor to play alongside. Writing ’12 Pexa 2’ in our lineup meant we were solid that day; there would be no running game against us and we had our best hitter in the lineup. As a pitcher, you just did what he told you to do; get the hitter. He took care of the rest,” Dunker commended.

Another longtime teammate and accomplished pitcher for the Irish, Josh Simon, touts Pexa’s knowledge of the game, “His baseball IQ was that of a Harvard grad. As a catcher, he was a pitcher’s dream.”

While longtime battery-mates of Pexa rave about his abilities as a catcher, he was also an extremely accomplished right-handed hitter who could line the ball all over the ballpark. He had great bat control, and could spoil pitch after pitch, fouling them off until he got the pitch he wanted. He hit for a high average throughout his career, with plenty of extra-base hits, and some occasional power to hit the ball out of the park. Later in his career, his athleticism allowed him to play positions all over the diamond. No matter the position, he was an above-average fielder with range and soft hands.

As Pexa looks back on his amateur career, he’s especially fond of the memories he made with his teammates, “I really enjoyed the days of driving two hours on weeknights to play Region games against other leagues. My memories range from Jeff Bjerke hitting a homerun to beat Bill Dunker [before he joined the Irish] at Eagle Lake in my first year, or when we placed 2nd in the Region at Waterville in 2008 after taking the long way through the bracket (that included an Ambroz’ chipped tooth). Also, the many battles with Blue Earth that we managed to come out on top. I also enjoyed the Wednesday night practices that accompanied those Region games; we had so much fun up in that shack [in St. Patrick]. Guys like Craig Boser, Adam Almich, Wade Schuknecht, Matt Ambroz, Josh Simon, Bill Dunker, Johnny Johnson, Jeff Bjerke, Colton Borwege, Dom DeLuca, and the late Monte Hennen; I cannot thank each of these guys enough for all the friendship and fun they provided me through all the years of playing. I’m very lucky that my family was very supportive of my athletic career across the board. They truly enjoyed supporting me and being part of the Irish family.”

Pexa and the Irish had plenty of State Tournament games throughout the years, but unfortunately, they never won a Championship. Regardless, Pexa recounts some of his favorite State Tournament memories, “I will always remember the time in Red Wing when Jeff Bjerke hit a double to score me from first base to put us ahead late in the game, or when Josh Simon threw a guy out at home from centerfield for a force out. The very next play we didn’t cover a base for a force, otherwise we likely would have been in the Championship game. Or warming up Ben Wirt for 4 consecutive innings as Bill Dunker (draftee because of the Bjerke homerun mentioned previously) battled through his no hitter, or the 14-inning game at Shakopee where we ended up winning on a walk-off hit at 1:30 am.”

When asked what he hopes people remember about him as a player, Pexa says, “I think I was one of the last of the ‘old school’ players that brought a fierce competition to games, I hope people remember that about me.”

As he moves on to the next areas of focus in his life, he has some ideas on what he wants to do, “I have not had too many summers to myself, so simply enjoying the sun (with SPF 100) is a start. After that, I have run three marathons so I could see myself running a few more. I’ve also been working on my pilot’s license (6 hours in), so hopefully getting that. Otherwise, I’m looking forward to being with my wife Lauren as we work through our life adventure together.”